Virginia Republicans see 2021 as an opportunity to compete statewide 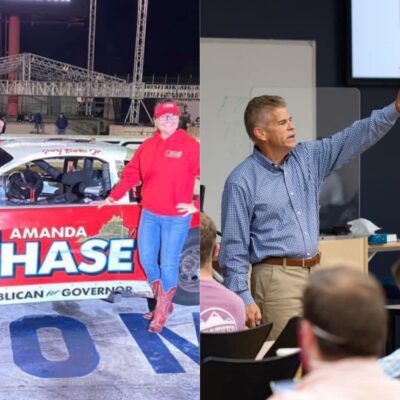 This is the first installment for Virginia Scope’s newsletter covering the 2021 statewide elections. This email was sent to all subscribers, but the majority of content will be for paid subscribers only. You can subscribe for $5/month or $30/year to keep up on everything happening as Republicans try and win back Virginia. Subscribe here.

We are entering a new era. A post-Trump political landscape that has many people wondering if this is an opportunity for Virginia Republicans to be competitive statewide for the first time since 2013.

With Joe Biden winning, Republicans are eyeing the Governor’s mansion in hopes that the electorate will be motivated to counter a Democratic White House. “There will be Republicans who are angry about Biden’s victory and they will be motivated to work for a Republican candidate in 2021,” said Dr. Stephen Farnsworth, Professor and Director of the Center for Leadership and Media Studies at the University of Mary Washington. “If there will be enough Republicans to win an election depends to a great degree on the candidate selected.”

Strategists in the party say that it will have to be a Republican that can unite the different factions of the party across the state. “Republicans are going to be sorely pressed to find someone who speaks the values of the western half of Virginia with the sensibility of the eastern half,” said Shaun Kenney, former Executive Director of the Republican Party of Virginia. “You want someone who reassures Trump supporters while reassuring suburban conservatives that they are going to be about the business of governing.”

The one thing that every professor, analyst, or strategist interviewed for this article believes is that the Republicans would be forfeiting the election by nominating a candidate like state Senator Amanda Chase (R-Chesterfield).  “The Republicans sometimes have not put the most effective candidate forward in their nomination process and that has hurt their prospects,” said Farnsworth.

Chase has been removed from the Chesterfield Republican Party and kept at a distance by her Senate colleagues. The Senate GOP Leader Tommy Norment has chastised the Senator publicly on the floor, and privately in caucus meetings, on several occasions for the statements she has made.

Recently, Chase has also been linked to two armed individuals that were arrested outside of a vote counting facility in Pennsylvania. The men have posed for photos with Chase several times and were also standing beside the Senator when she announced her candidacy for Governor.

Both from Virginia, Antonio Paredes LaMotta, and Joshua Macias were each charged in Pennsylvania with carrying a firearm on public streets, which is a first-degree misdemeanor and having a concealed firearm without a license, which is a third-degree felony. They had multiple weapons and over 160 rounds of ammunition in the vehicle when arrested by police.

LaMotta has a history of expressing extremists views that often match the rhetoric that Chase uses. “The entire plot is equivalent to crimes against humanity for causing premeditated deaths, suffering, and economic hardship, in combination with the suppression of preventive medications and natural treatments,” wrote LaMotta in a cached Facebook post about the COVID-19 pandemic. “Killing these people is a legitimate act of self-defense and not a crime.”

Chase first denied any real connection to the men on Facebook, calling them a “Friend of a Friend,” reported Ned Oliver.

The senator also denounced acts of LaMotta and Macias – at first. But eventually, while hosting a “Stop the Steal” rally in Richmond on Saturday, Chase defended the men while speaking to a crowd of close to 100. “Two of my veterans, two of our veterans from Virginia went up to Pennsylvania to observe voting counts and they were carrying. And they got stopped and now they are trying to equate this as somehow that we are supporting destruction,” said Chase in the video recorded by Goad Gatsby.

The candidate that the establishment figures in the Republican Party seem to be gravitating towards is former Speaker of the House of Delegates, Kirk Cox (R-Colonial Heights). Cox is considered much more even-tempered and pragmatic than Chase. Cox has even occasionally worked with members from across the aisle, including passing Medicaid Expansion while he was Speaker. “The budget also includes what I consider the most conservative set of reforms to Medicaid in the nation as part of a plan to expand healthcare coverage to working Virginians,” said Cox in a statement at the time.

However, with Chase seeking to widen the divide between the two parties, many Republicans worry that Medicaid Expansion could hurt Cox in the primary –  Delegate Chris Peace from Hanover was primaried for supporting the expansion, as was Senator Emmett Hanger from Augusta. Hanger was able to hang on to his seat, Peace was not.

Perhaps to combat the nomination worries, Cox has been taking actions in recent months to appeal directly to the GOP base – something he has not typically done in elections. This includes posting multiple videos of him shooting guns and amplifying the messaging of President Trump in recent days by using the term “legal votes.”

Democratic operatives and strategists have noticed the trend from Cox as well. “Kirk Cox can’t seem to decide who he is,” said one Democratic operative in an interview on background. “It has been quite a ride to watch him go from the community hot dog-man to retiring-backbencher to fire breathing Amanda Chase-fellow traveler with statewide ambition.”

However, Cox has not taken it nearly as far as Amanda Chase. As reported by Virginia Mercury, when asked why she is the only Virginia GOP candidate that is openly opposing the results of the presidential election, Chase replied, “Because I’m the only elected Republican official with balls. That’s why.”

Chase has been campaigning since early 2020 and has built a cult-like following. She also has a large presence on Facebook where videos of her rants often receive thousands of shares, which makes her “feel like she is a rockstar,” as one Republican strategist described it.

But still, many analysts believe that Cox has the best shot of winning in the general election – at least if Chase is the only other big name in the race. “The GOP fumbled an opportunity to elect a Republican Governor in 2013 because they nominated Cuccinelli instead of Bolling, they went hard to the right,” says Chaz Nuttycombe, the Director of CNalysis, a forecasting group that predicts state government elections “They’ve got a shot this time unless it’s Chase. If it’s Cox, Democrats are going to be in a dogfight.”

In an email response, the Cox campaign says Republicans want a candidate that will fight and win. “People want to see someone who knows what it takes to fight, lead, and win in the Governor’s mansion,” said Zachary Wood, an aid to Cox. “[Kirk] looks forward to making his formal announcement in the coming days, so we can begin the process of building a Republican coalition that can actually win. He holds the bluest seat of any Republican in the General Assembly; if anyone can bring the party together and win, it’s him.”

While Chase and Cox are the only candidates to publicly state their intentions to run, (Cox has not officially launched his campaign yet) there are several Republicans still in the mix across the Commonwealth.

Pete Snyder, a big figure in Virginia GOP fundraising and the chairman of Ed Gillespie’s campaign for Governor in 2017 is being rumored to run this year. He has not run for public office since 2013 when he lost in the Republican nominating convention for Lieutenant Governor.

Some strategists in the GOP believe that Snyder is a promising candidate as well. They tout his fundraising ability and his recent efforts to save small business jobs during the pandemic as a reason that he would be hard for the Democrats to beat. Snyder launched the VA 30-Day Fund, a program that gives money to eligible small businesses in order to help them survive the COVID-19 crisis. “The nonprofit Virginia 30 Day Fund was launched by Virginia technology entrepreneur Pete Snyder and his wife, Burson,” says the description on the website. “Working with other business leaders throughout the Commonwealth, the Fund’s goal is to help save as many Virginia jobs as possible.”

Other potential candidates include the former CEO of the Carlyle Group Glenn Youngkin, former CEPA CEO Pete Doran, former state Senator Bill Carrico, and outgoing United States Congressman Denver Riggleman (VA-05). Although, it is just as likely that Riggleman could run as an independent, which would likely secure a Democratic victory in November. This list is likely to grow in the coming months.

Virginia is seen by many pundits as a solidly blue state after huge gains in the state legislature and Biden’s 10-point win. But still, experts believe this race can be competitive as long as the right pieces fall into place. “Republicans can win blue states, you don’t have to look any further than Maryland to see it,” said Dr. Farnsworth. “But, not every Republican can win in a blue state.”

If you are interested in subscribing to this newsletter, please sign up below! (Subscribers to Virginia Scope on Patreon will be added automatically.