Students Say Protests Motivating Them to the Polls 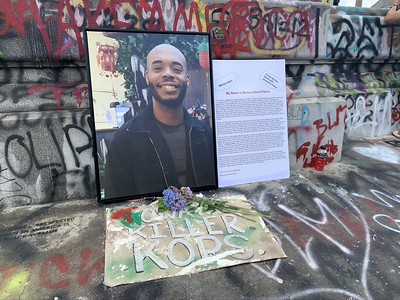 RICHMOND, Va. — Voters are more divided now than they were in the 2016 election, according to a recent poll by the Pew Research Center. Many young Virginians believe the passion could translate to the polls on Election Day.

Rickia Sykes, a senior at Norfolk State University in Norfolk, said that her political views have grown stronger since protests erupted globally in late May. The death of George Floyd, who died after a Minneapolis Police Department officer kneeled on Floyd’s neck for nearly 8 minutes, inspired months of protests.

Sykes said that her political views line up with her faith. She considers herself pro-life, believes in advocating for the working class, and supports law-enforcement.

“The protests have shown me we need to keep God first, but it has also shown me that good cops are important to help keep law and order,” Sykes said in a text message. “I do realize that there are bad cops, but in order to make a change, I believe we need to work together with the good cops.”

Sykes said that now she researches politicians more thoroughly before deciding which candidate gets her vote. She looks at voting records to see if they vote in a way that “will help us middle and lower-class families.”

Erik Haugen, a junior at Virginia Commonwealth University in Richmond who considers himself a Libertarian, said his political views haven’t changed much since the protests started.

“I just see the stronger push for equality, and I think it’s a good step in our nation so long as it proceeds peacefully,” Haugen said.

Equality is at the center of issues that student voters are concerned about this election. From racial injustice to prison reform to healthcare concerns, many students say they want to enact positive change.

Sarah Dowless, a junior at William & Mary in Williamsburg, said that voting has always been important, but the protests have made voting more prominent, “like people encouraging folks to vote and making information about voting accessible, especially among young people.” Dowless said the recent protests have reinforced her progressive beliefs.

“If anything, the protests have only amplified my concern for racial injustice in America and my concern about police brutality,” she said. “It’s a fundamental issue about freedom and it calls into question the very principles on which this country was founded and continues to claim.”

According to the United States Census Bureau, voter turnout among 18 to 29-year-olds jumped 15.7% between 2014 and 2018. This was the largest percentage point increase for any age group. Turnout is expected to be high this year as well, but there are no final numbers for age groups. Voter registration in Virginia set a record this year with almost 5.9 million voters  registering. During the last presidential election a little more than 5.5 million people registered to vote.

Sykes is also concerned about the economy and health care.  She wants a political leader who will increase the odds that people have a stable source of income to afford medical treatment.

“As a graduating senior, I want and need a good paying/stable job for when I graduate,” she said. “I need someone who will make sure we have a strong and reliable economy.”

Dowless wants U.S. prisons, which she describes as currently being “more punitive than rehabilitative,” to undergo major reform. Haugen would like police academy programs to be longer and implement de-escalation training.

“I first and foremost care about the safety of the American people,” Haugen said.

Early voting and no-excuse absentee voting are currently underway throughout the state. The deadline to request to vote absentee by mail is Oct. 23. Early voting ends the Saturday before Election Day, or Oct. 31.

Capital News Service is a program of Virginia Commonwealth University’s Robertson School of Media and Culture. Students in the program provide state government coverage for a variety of media outlets in Virginia.