Spanberger and Freitas meet for only face-to-face debate 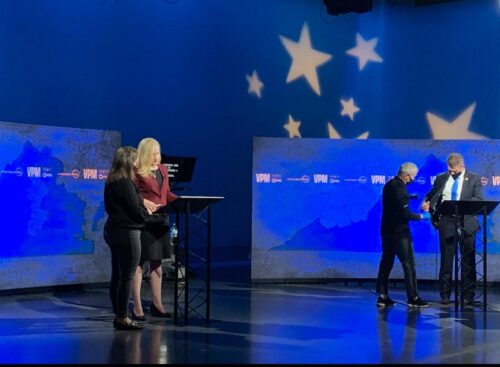 In their only planned face-to-face meeting of the cycle, Democratic Congresswoman Abigail Spanberger and her Republican challenger, Virginia Delegate Nick Freitas, met on Tuesday night and discussed the issues at stake in this election.

Both candidates highlighted their past job experience – Spanberger in law enforcement and the CIA, Freitas a former Green Beret in the Army. Freitas said that the reason he entered into public life was witnessing lawmakers dismantle the core principles of the country while he was serving in the military. Spanberger also highlighted her work in Congress since being elected in 2018, citing many bipartisan efforts in which she was involved.

Below are the questions posed to each candidate and their responses.

Do you believe another stimulus package is necessary?

Freitas failed to provide a yes or no response to the question, but he did say that he would not have supported the bill proposed by Speaker Nancy Pelosi (D) in the House of Representatives. While Spanberger voted against the Pelosi bill, she said another stimulus package is necessary and that she has been fighting for it. Spanberger voted against the Pelosi bill because it was not negotiated with the Republicans, she said, and she knew that it would not receive support in the White House or GOP Senate.

Do you believe that income inequality should be addressed by raising the federal minimum wage?

Spanberger said that after speaking to families in the district, she believes and also voted in support of increasing the federal minimum wage to $15 in phases. She called the current situation an “Inequality of opportunity.”

“Less than 3% of the labor force makes minimum wage,” said Freitas in his response. He said that the unemployment rate for the youth population would increase due to small businesses having to cut jobs in order to pay current workers the increased wages. Freitas said that no matter how good the intentions of the Democrats are on this issue, he still believes it would limit job opportunities.

Virginia is expected to receive nearly 500,000 vaccine doses by January