While spending large amounts of cash, Democrats and Republicans take a different approach in the field
Skip to content
You are Here 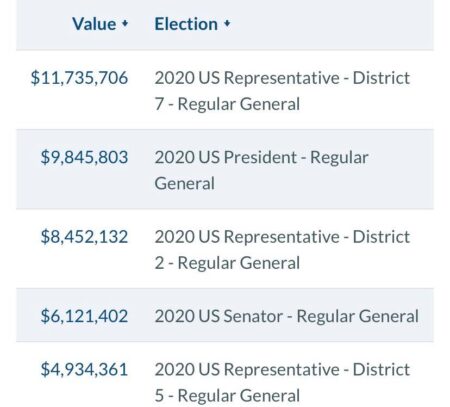 Virginia Democrats have made huge gains in recent years and have often credited their field volunteers and contacting voters directly at their door as a large part of that success. But hat operation that they have improved upon year-after-year is not an option this year. Due to the COVID-19 health pandemic, Democrats have mostly abandoned their field operations.  Instead of having to focus on coordinating large swaths of volunteers spreading out across neighborhoods talking to voters, Democratic campaigns and the groups that support them are spending millions of dollars to reach out to voters digitally.

Meanwhile, Republicans have not abandoned the practice of canvassing neighborhoods and say that they are having “tremendous success” talking to voters while remaining safe. Staffers within the party say that the people who canvass always wear a mask and continuously practice social distancing.

“I am extremely proud of the dedicated Gade campaign volunteers and interns we have,” said Daniel Gade, the Republican candidate for U.S. senate. “Our door knockers are wearing masks, walking back a couple of feet after they knock and following campaign guidelines. Democrats just started lit dropping, so we are confident we are going to have a strong advantage on the ground.”

The GOP campaign in VA-07 told Virginia Scope that they have volunteers canvassing daily. “Our team and volunteers are out every day safely canvassing and going door to door,” said Joe Desilet, campaign manager for Nick Freitas. “At the start of the general election, we put together standard procedures for everyone to follow to allow us to have direct conversations with voters while being as safe as possible and it has gone incredibly well so far.”

Dr. Stephen J. Farnsworth, Professor and Director of the Center for Leadership and Media Studies at the University of Mary Washington is unsure if knocking doors will have any impact on this election cycle. “I think it’s an open question how effective door knocking is going to be in 2020,” said Dr. Farnsworth. “The vast majority of people have already decided which candidate they are going to support. I do not think there are all that many persuadable voters out there.”

Democratic operatives say that with persuasive field campaign strategies non-existent, the candidates have no other option but to rely heavily on digital advertising to contact the few potential persuadable voters that might remain. The congressional races across Virginia are hitting astronomical highs in ad spending this cycle compared to just two years ago.

The race in VA-07 between Congresswoman Abigail Spanberger (D) and the Republican challenger, state Delegate Nick Freitas, is shaping up to be one of the most expensive and competitive races in the country. The Virginia Public Access Project (VPAP) shows that $2 million more has been spent in ads for VA-07 candidates than the presidential race has yielded across the entire Commonwealth.

Freitas has broken fundraising records for Republican House candidates in Virginia but Spanberger is still outraising him by a considerable amount. Spanberger’s campaign war chest matched with high spending totals from the groups that support her has made this race the most expensive contest in Virginia. According to  VPAP, this race already surpassed $11 million spent in ad buys by the second week of October. The entire VA-07 contest in 2018 totaled only $7.4 million.

With weeks still remaining before election day, the pro-Spanberger ad spending this year has already matched the $6.6 million spent in total in 2018. Pro-Brat ads totaled $3.1 million in 2018. The pro-Freitas ad spending has already surpassed that by hitting $4.6 million in early October.

VA-02 is where the residents in the House district that covers the southeast coast of the state are deciding between the same two candidates as 2018. Former Congressman Scott Taylor (R-Va Beach) is running against the current Congresswoman Elaine Luria (D-Va Beach).

In 2018 when Luria challenged and defeated Taylor, the ad spending for the entire race totaled $6.9 million. With more than three weeks remaining until election day, the VA-02 race has already surpassed $8.2 million.

VA-05 has nearly doubled the total ad spending from 2018 as Democrat Cameron Webb is posing the strongest challenge for this seat by his party since Tom Perriello won in 2008. Bob Good, the Republican candidate that ousted the incumbent Congressman Denver Riggleman in a nominating convention. Good has struggled with uniting the party or find any momentum after the nominating convention.

Riggleman has yet to endorse Good.

With the money advantage giving them momentum as they head towards the finish line, the Spanberger and Webb campaigns say that they are still finding ways to reach out to voters in the field while still keeping volunteers safe.

“Protecting public health and eliminating the coronavirus should be a top priority for all Americans, and it certainly is for our campaign,” said Bettina Weiss, campaign manager for Congresswoman Spanberger. “While Abigail has been working on this from a policy standpoint on Capitol Hill, our campaign has been implementing safety guidelines to protect the community. This is why masks are required at all campaign events and why we have focused our voter outreach on contactless efforts — including phone banking, sign delivery, and contactless canvassing, also known as lit drops.”

The Webb campaign echoed the same sentiment, saying that they have dropped off campaign literature and instructions on how to vote to over 25,000 voters. “We’ve also expanded our use of other canvassing tools beyond a traditional campaign year like phone banking, texting campaigns, and relationship-based voter outreach,” said Mia Ehrenberg, Communications Director for the Webb Campaign

Political scientists continue to ponder if any of this will matter this year. “You are seeing congressional campaigns ramp up outreach efforts,” said Dr. Farnsworth, talking specifically about competitive races like VA-05 and VA-07. “That may make sense at the margins, but all indications are that the electorate of 2020 is very motivated and not likely to be on the fence as far at their partisan preferences.”