VA-07 Friendly-Fire Republicans: Freitas vs. McGuire
Skip to content
You are Here 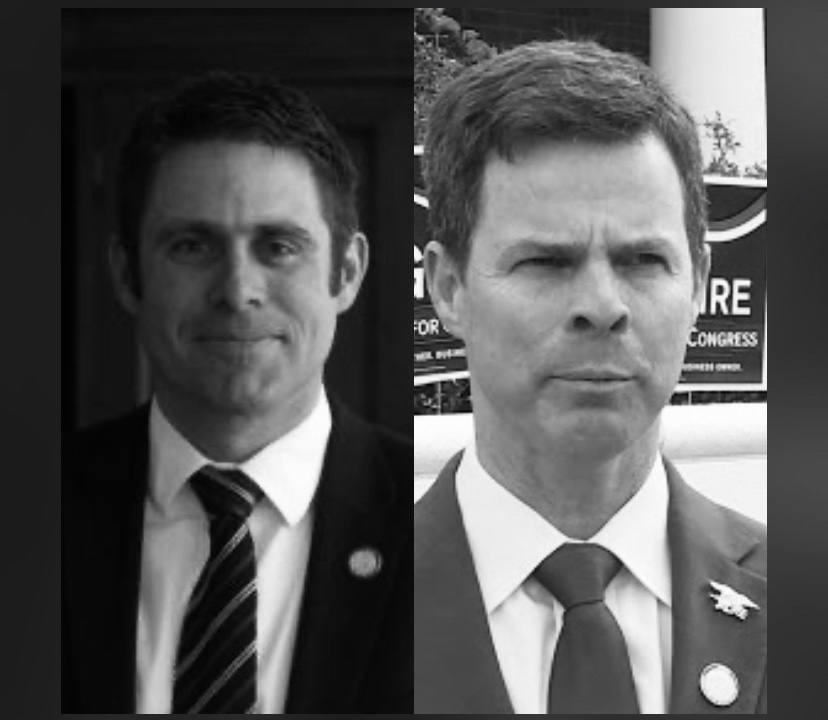 Ballot stuffing and corruption are just a few of the accusations made during the most recent Republican congressional nominating convention in Virginia. But still, Virginia’s 7th congressional district has chosen this method to nominate a candidate later this month to run against the Incumbent Congresswoman Abigail Spanberger (D-Henrico).

A nominating convention is unique because you have to sign up to become a convention delegate first, then show up and cast your vote at one site with everyone else who is a registered delegate. In a district the size of New Jersey, only 1,500 delegates voted in the VA-05 convention in June.

If a majority is not found for one candidate after the first ballot vote, a second ballot will take place. This is where conventions can become interesting as maneuvers are made by candidates to reign in support of the candidates who have no chance of winning. The ballots continue until a candidate is selected by a majority.

Conventions can be shady processes where supporters of losing candidates often look to and point at any hint of foul play. This often leads to hard feelings and grudges forming within a party.

Following the recent fiasco in the 5th district where Republican Congressman Denver Riggleman lost his seat to a challenge from the right, the 7th district Republicans prepare for their own day of reckoning on July 18th.

Six candidates will enter, but only one survives.

The hit-tactics in the 7th have been underway for months – especially between the two front runners; State Delegates Nick Freitas (Culpeper) and John McGuire (Goochland).

But the move that led to the quick deterioration of niceties in this race was McGuire’s camp trying to purchase out the venue where the convention is being held in Doswell. If McGuire would have been successful, it would have meant the convention could not be held at that location on the day scheduled.

It is not clear as to why they tried to prevent the convention from being held at the Doswell site, but McGuire’s camp defended themselves by implying they were not interested in actually renting the venue when they reached out to owners of the venue. Worth noting that McGuire’s campaign manager was no longer associated with the campaign the morning after the following statement was released:

The next day, news broke that Nick Freitas failed to file his candidacy paperwork for the second year in a row. Freitas first did not file the correct paperwork last year in his re-election bid for the House of Delegates, but a large infusion of cash from California helped him mount a successful write-in campaign to keep his seat.

Freitas said he hired a new compliance position to ensure that these deadlines were not missed this election. That person is no longer working for the Freitas campaign. McGuire has hit Freitas for this failure multiple times already.

The State Board of Elections will be meeting in July to decide whether they will grant an extension for these candidates and others across Virginia who failed to turn them in on time.

Moving on from the paperwork snafu that plagues the Republican Party, the Protect Freedom PAC sent out mailers aligning McGuire with Democratic Governor Ralph Northam, saying Democrats are “so excited” about McGuire. The backside of the mailer stated that McGuire “supports the same abortion-on-demand agenda,” as Democrats. This ‘abortion on demand’ phrase is what Republicans often try to use to attack Democrats who support a women’s right to choose.

As a response to this mailer in late June, McGuire paid for a robocall from a woman who says she is a leader of the pro-life movement in Virginia. The woman directly addresses the mailer accusing McGuire of not being pro-life. “Not only is this false, but John McGuire has always been a leader and stalwart ally of the pro-life cause.”

McGuire also defended himself on Facebook, saying a special interest group that supports Freitas “attacked” him “with a crazy mailer”. McGuire addressed directly Freitas by name in this post. “These attacks are so baseless, Nick didn’t have the guts to put his own name on it! Friends, it’s obvious that Nick is seeing his delegate count get smaller by the day,” said McGuire. “When you start a negative campaign it’s because you are losing. More Proof that Nick is forgetting more than his paperwork!!!!”

McGuire also created a website titled “Libertarian Nick”, where he accuses Freitas of not being a Republican because he supported the decriminalization of marijuana in the General Assembly.

A poll from Christopher Newport University says that 83% of Virginians support decriminalization.

Tina Ramirez, a first-time candidate from Chesterfield who was the first announced GOP candidate to try and run against Spanberger jumped in the fray to push back against mailers calling Freitas the pro-life candidate. “There was an incredibly dishonest mailer sent out by a DC lobbying group that supports Nick Freitas,” said Ramirez in a Facebook post. “This mailer stated that Nick was the only candidate who will vote to protect life. Obviously this is untrue and particularly offensive to me, as a mother who picked the easy choice of life in a difficult situation.”

Ramirez, who is originally from Powhatan County, has received some support in the southern part of then district around Chesterfield – but name recognition and fundraising numbers are preventing her from getting a share of the spotlight ahead of the convention.

Andrew Knaggs has also failed to gain any momentum in his campaign. Knaggs’ is a former member of the Trump administration where he served as Deputy Assistant Secretary of Defense for Special Operations and Combating Terrorism.

Although he lacked name recognition as well, early on it looked like Knaggs could contend for the nomination. But with Freitas and McGuire sucking up all of the oxygen in the room, Knaggs has failed to find his lane in the race leaving him on the sidelines.

The remaining candidates in the race have not received much support at all from members of the party within the district. Multiple strategists from both parties have mentioned the possibility that McGuire and Freitas beat up on each other so badly and cause such a divide that allows Ramirez or Knaggs sneaks in and receives the nod for the nomination.

This historically-Republican district has balanced out in recent years and shifted towards the left. Knaggs and Ramirez could arguably be stronger opponents against Spanberger. Both of them being minorities could be attractive to moderate voters in the district that left Brat in 2018 for Spanberger. Spanberger flipped this seat in 2018 amongst a powerful blue wave that overtook the country giving the Democrats a comfortable majority in the House of Representatives.

Now Congresswoman Spanberger with a mountain of cash that she has already raised while trying to build a reputation of being a moderate that can achieve bipartisan victories, doesn’t even have to campaign. Her potential Republican opponents are handling that for her.

Right now freelance journalists and engaged members of the community are ensuring that the facts of these historical times are reported. As our platform searches for and amplifies the truth across Virginia each day, we need help paying these journalists who are on the ground doing the work to report on these events as they happen. They do not receive any corporate sponsorships or a salary with benefits to keep them safe as they relay important information in real-time.

Help us as we help them give a megaphone to the voiceless while holding truth to power. All of the money donated goes directly to reporters and concerned citizens that are on the ground each day giving you the news.

You can pay any amount that you are comfortable spending.

Subscribe monthly on Patreon or you can make a one-time donation through Paypal here. Either way, your money will go a long way in making Virginia more accountable.

Sign up for weekly updates on the race for Virginia's 7th congressional district seat between Abigail Spanberger (D) and Nick Freitas (R) https://t.co/vpYECo2BEg
View on Twitter
1
2