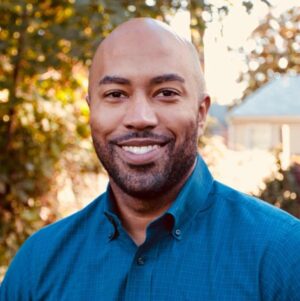 Earlier this week, Sean Perryman, a community activist and the current head of the Fairfax NAACP chapter officially announced his candidacy for the Democratic nomination for Lieutenant Governor of Virginia.

In an interview with Virginia Scope, Perryman said that even though he is not an elected legislator, he believes he has gained a unique perspective and the experience needed through his work in the community. “I am able to speak to the moment we are in,” he said referencing the national reckoning with race and the COVID-19 health crisis.

Perryman currently works on policy in the technology sector, but he noted in an interview that he also sat as counsel for the Democrats on the House Oversight Committee while working for Congressman Elijah Cummings.

“He led the advocacy effort toward renaming Robert E. Lee High School in Springfield, Virginia to the John R. Lewis High School,” according to the description on Perryman’s website. “He has been a leader on addressing the school to prison pipeline, affordable housing, and worker protections during the coronavirus pandemic.”

Announcing his platform on Thursday, Perryman said he wants to reimagine public safety by creating a more compassionate model. “The murders of George Floyd and Breonna Taylor reignited the Black Lives Matter movement,” said Perryman. “Communities across American are grappling with the persistent racism within our public safety institutions and policies. For decades, law enforcement and the justice system have viewed incarceration as a solution to our societal problems.”

Other items on the Perryman platform include creating an economy that works for all, addressing the climate crisis, and making Virginia a more equitable Commonwealth.

Perryman is also calling on his fellow Democrats to hold a series of debates.

“I’m calling on my fellow Democratic candidates in the race for Lieutenant Governor to commit to a series of debates over the course of this campaign,” said Perryman. “Not only should we commit to general debates, but we should also hold debates on at least five policy areas that a potential Lieutenant Governor will have to address on behalf of Virginians.”

Several elected Democrats are expected to join the race for the top spot in the state Senate. Delegates Hala Ayala and Elizábeth Guzman have already launched official campaigns and several more elected leaders across the Commonwealth are exploring the option.

Perryman believes that his experience working directly within the community gives him a unique perspective that will separate himself from the other candidates. He told Virginia Scope that he will be an honest broker for the community that can speak for the people on the ground.

“I am running not to promote myself and my career,” said Perryman. “I feel that we are not actually addressing people on the ground and what they need from the state government.”