Dr. Cameron Webb continues to show momentum with a big fundraising quarter
Skip to content
You are Here 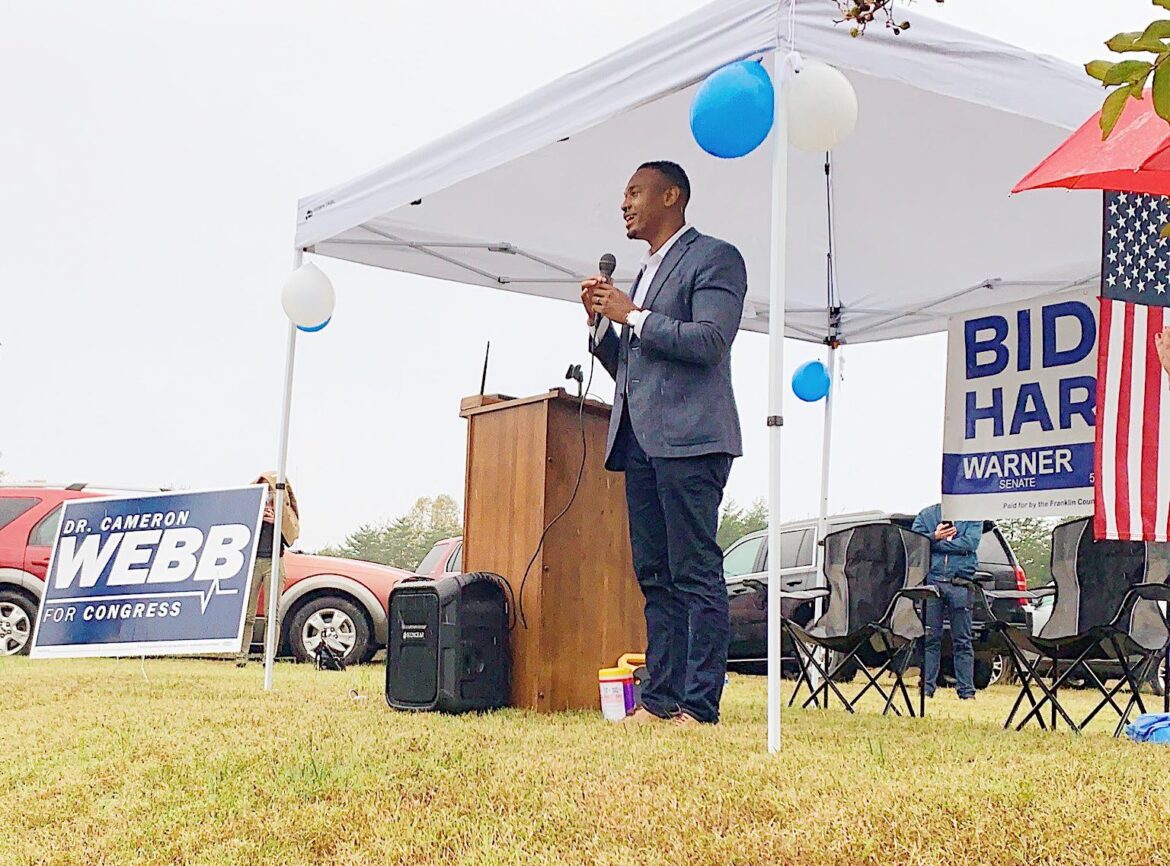 The campaign for Dr. Cameron Webb, the Democratic candidate in Virginia’s 5th congressional district says that they raised $2.7 million in the most recent fundraising quarter. The average donation to the campaign was $72.

“I am humbled and grateful for the overwhelming support we’ve received these last few months,” said Dr. Cameron Webb. “Our fundraising numbers reflect the enthusiasm that I see and hear from voters on a daily basis.”

Webb is facing Republican Bob Good, the man who ousted one-term incumbent Denver Riggleman in a nominating convention earlier this year. Good announced his candidacy shortly after Riggleman officiated a wedding between two of his staffers that are gay.

The 5th district seat is typically held by a Republican but it is now a competitive race for the first time in over a decade. Cook Political Report and Larry Sabato’s Crystal Ball have both recently moved the race from favoring the Republican to a toss-up.

“The 5th is probably the biggest challenge for the Democratic Party, but the reality is that this is seen as a targeted race and a significant amount of Democratic money is pouring into the 5th,” said Dr. Stephen Farnsworth, Professor and Director of the Center for Leadership and Media Studies at the University of Mary Washington. “The influx of democratic cash convinces people who could be spending money in any congressional race, that the 5th district of Virginia is a good investment.”

The Webb campaign released poll results recently that shows them with a 3-point lead over Good in the district. “Voters across Virginia’s 5th District are sick of the same old partisan, Washington politics, which is why they’re responding to our message of putting people over party,” said Webb on Friday when his campaign released the results.

The last time a Democrat held the seat in VA-05 was in 2008 when Tom Perriello won with the Obama landslide at his back. Perriello served only one term before being voted out of office in 2010.

The Democrats have since repeatedly tried and failed to flip the seat.

However, it is hard to not notice the rift in the GOP that still exists after the contentious nominating convention earlier this year between Good and Riggleman. Experts believe this is one of the main reasons Webb has so much momentum, “This would not be the case if Riggleman had been re-elected by the Republicans,” said Dr. Farnsworth.

Good has struggled to raise money and he has yet to release the recent numbers. However, at the previous filing deadline Good had only raised $262,000 compared to Webb’s $1.3 million.

Riggleman supporters feel burned by the process and the Congressman will not be endorsing Good for the seat. This has left many GOP operatives questioning if Good can drive enough of the base to the polls. “Everyone should be worried about his ability to run a serious competitive campaign,” said one GOP staffer that asked to remain anonymous.

“The single biggest advantage that Webb has in this race was the divisive Republican nominating contest and the decision to abandon the incumbent,” said Dr. Farnsworth. “This race would simply not be on a list of priority campaigns if Riggleman had been reelected.”

It is becoming evident that the Democrats have found their perfect scenario – a strong candidate during an election cycle where the base of the GOP voters in the district is divided – possibly jump-starting the political career of a new, young voice in the Virginia Democratic Party.