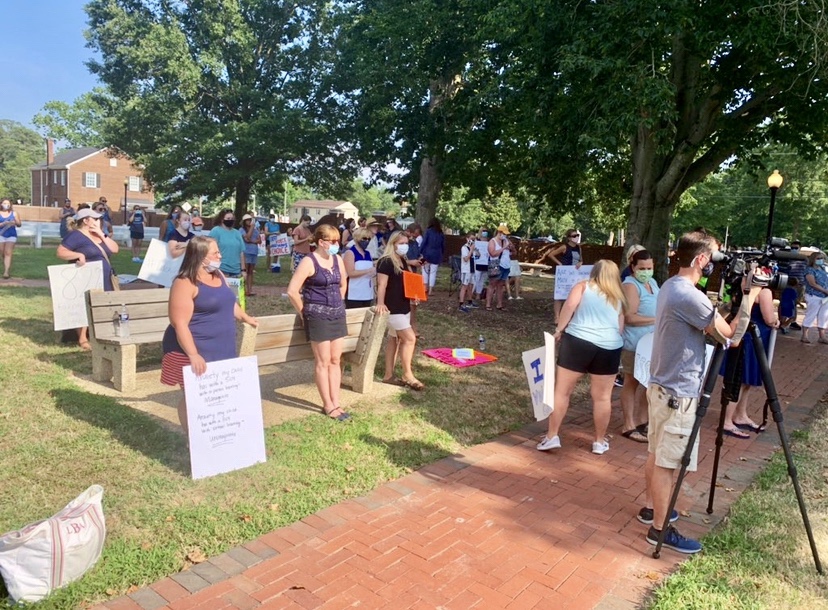 Chesterfield County’s school board met for a special session on Monday to decide on the plan for the beginning of the next school year.

The school board was contemplating six different options for reopening that included a mixture of fully virtual, kids in school all five-days, or students attending various days but not five-days a week.

Option six is fully virtual, and that is the option that Merv Daugherty, the Chesterfield Superintendent of Schools recommended on Monday. “It is recommended that the School Board adopt Option 6, tied to the Governor’s Phase III reopening plan for the opening of the 2020-2021 school year until further metrics and guidance from regulatory agencies can be provided,” said Daugherty in a letter to the board.

The phased reopening plan from Daugherty’s office includes bringing previously-identified vulnerable student populations back separately as soon as possible. His plan outline also said teachers will be working from the classrooms everyday and that there will be daily attendance and lesson checks.

The debate in the community has created a large divide between parents and teachers who support reopening fully vs. a fully virtual school week. Prior to the meeting, supporters of both sides held demonstrations in the Chesterfield Government Complex.

The Chesterfield Education Association (CEA) and supporters of a fully virtual reopening met behind the police station for a car rally that spread out across two parking lots. “Your decision is not easy,” said Sonia Smith, the president of CEA, in front of the board on Monday night. “Every single scholar and every single employee puts their trust in you.”

The CEA announced in June that they support only a 100% virtual return to school.

Supporters of an option to send kids to learn at school met in front of the police station where they gathered around a microphone and heard from different speakers about why they support reopening. “Let us let our kids do the thing they were made to do.” said one mom speaking to the crowd. She told the crowd that she is not lobbying for all kids to have to go back to school, but she wants the option to send her kids back.

At the meeting, David Johnson, the Director of the Risk Management Department in Chesterfield told the board that returning to school five-days-a-week at full population would create difficult challenges. He went into detail later saying students would be unable to social distance appropriately at a 100% return.

However, Johnson later said he believes personally that there is a way that students should be able to return fully, he just does not know how to do that properly.

Nicholas Oyler, the Student Health Services coordinator said that recommended procedures for students and staff will be 14 days of quarantine for anyone that spent 15 minutes within six feet of someone who has tested positive. Those recommendations are only for direct contacts with the person who tested positive, no secondary contacts.

Dr. Anthony Samuel, the Director of the Chesterfield Health District presented the board with data on current spread happening across the central Virginia region. Samuel said that children do not contract the virus at the same rate as adults. He also noted that the role children have in spreading the virus is not clear.

Dale Representative Debbie Bailey asked Samuel if it is possible for all students and teachers to be tested for COVID-19 prior to opening the schools. Samuel said that it would not be helpful, noting that it would only be a snapshot of one point, at one time.

Bailey also asked on behalf of teachers who are in the high-risk category if there is any science on transmission rates between children and adults. Samuel said it is not really clear yet, but he noted he has seen recent information that shows children older than 10-years-old transmit the virus at the same rate as adults.

The board received more than 1,100 online comments and 26 people signed up to speak publicly at the meeting. Public speakers included doctors, teachers, activists, and concerned parents trying to lobby the board to vote their way. A large portion of the public speakers were in support of schools reopening with in-person options.

The board also received information on a survey from Tom Bullis, the CCPS communications director.

The survey showed strong support for sending kids back to school, however, Bullis acknowledged that they cannot tell where the responses originated. “We are aware the survey link was shared with those outside of Chesterfield County Public Schools (including on a Facebook page that advocated statewide for schools to reopen throughout Virginia.”

After hours of input and information presented to them, the school board voted 4-1 for a virtual-only start to the 2020-2021 school year.

Matoaca representative Ryan Harter advocated for reopening with the hybrid plan. He pointed to the survey, that showed the support for reopening. However, it is worth noting again that the survey was shared in a group that advocated statewide for full reopening.

Harter was the only representative that did not support a fully-virtual reopen.

“Right now it is not possible to return to normal,” said Bermuda representative Ann Coker. “Option 6 makes the most sense right now”.